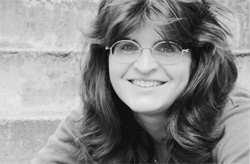 Born in 1966 in Zurich; studied Theology at Zurich University and Journalism at MAZ (Swiss School of Journalism) in Lucerne; now freelance author.
In addition to working on her own books, Katharina Morello has also developed teaching material for Religion & Culture, Secondary School Level I. Before this, she worked as a communications specialist at the development policy charity Bread for all and wrote journalistic articles for several print media, amongst others, the Tages Anzeiger, Wendekreis and the Zürichsee-Zeitung, as well as children’s stories for the magazine Kiki. She was, for a few years, editor of the Zürcher Kirchenbote (now called «reformiert.») and intercultural advisor for SAH, the Swiss Workers Organisation.

Katharina Morello received the Christoph Eckenstein Foundation Media Prize for her journalism project «Zimbabwe: Living with AIDS/ HIV» a project which came about while living in Zimbabwe for a year while her husband was working at Musiso Hospital. The stories in her first book «They carry the world on their heads» came, for the most part, from her time spent in Zimbabwe. The stories for her second book «A Carpet for Life» were collected while travelling in Turkey, India and Morocco, and from conversations with people met in Europe, from diverse cultural backgrounds.